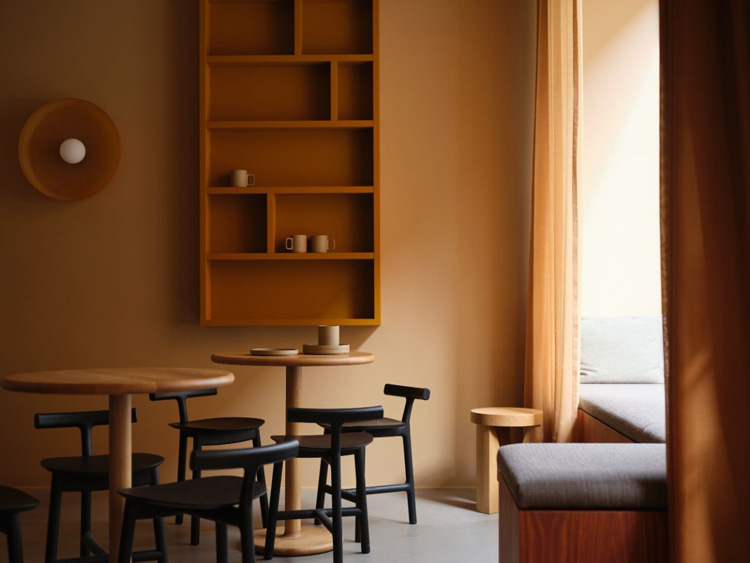 It’s not just a practical resource but an employee perk, says Note Design Studio of its latest interiors project. The team has developed a workspace with a difference for Swedish digital tech consultancy Samsen by integrating a wine bar.

Samsen’s staff are usually embedded into the offices of its clients, so a fully-fledged office was unnecessary. The resulting space borrows ideas from both hospitality and work interiors, as the team sought to balance “function and atmosphere”. Adaptable seating was key, the studio explains.

Inspiration was taken from the small bars and cafés found in Japan. These are spaces that “often seem tiny, but have a surprising capacity thanks to clever seating,” the studio says. This Japanese theme is taken further with the furnishings, which include dark woods and a balanced warm-and-cool colour palette. The star of the show, the bar, is built from chunky slabs of limestone – while the softer elements like half-length curtains divide the space.

Bondi Green, by Run for the Hills 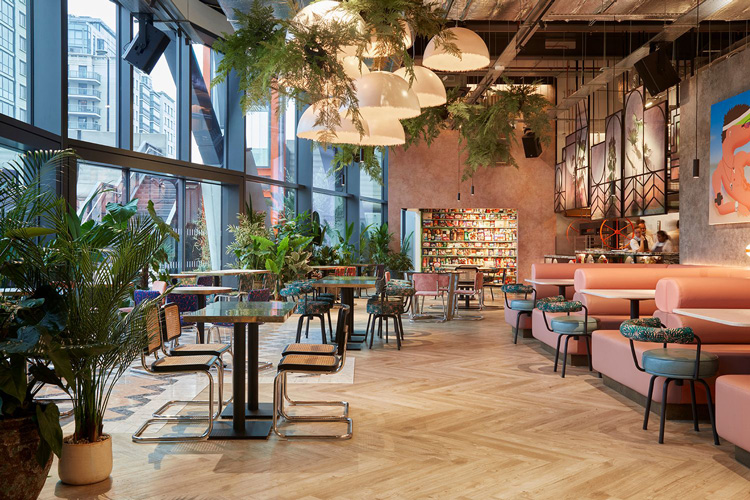 With their interiors for Bondi Green, Run for the Hills hopes to transport Paddington, London diners to Miami. The brief according to the studio was to create a “pared-back, semi-industrial scheme with touches of glamour”. For this reason, many of the concrete walls remain untouched. Others are highly decorative.

A “monolithic” bar is the main feature of the restaurant, and reflects the “beating heart of mixologists” according to Run for the Hills. It has space for tank beer and wine tasting and two cocktail stations and features dramatic curved forms and arches on the back bar. Bar accents are “light and fresh” but still in keeping with the industrial undertones. These elements, like raw lighting and exposed pipelines, contrast with the “ultra glamorous” seaweed-toned marble bar top.

Elsewhere, swivel seats have been paired with 70s style dining chairs, in a mix of velvet and raw cane. The idea was to mix tactile materials. These chairs sit under both square and circular tables for an “eclectic” feel. The space is finished off with a series of glazed metal framed panels featuring botanical prints, which have been designed by Justin J Hibbs, and mark out the semi-private kitchen. 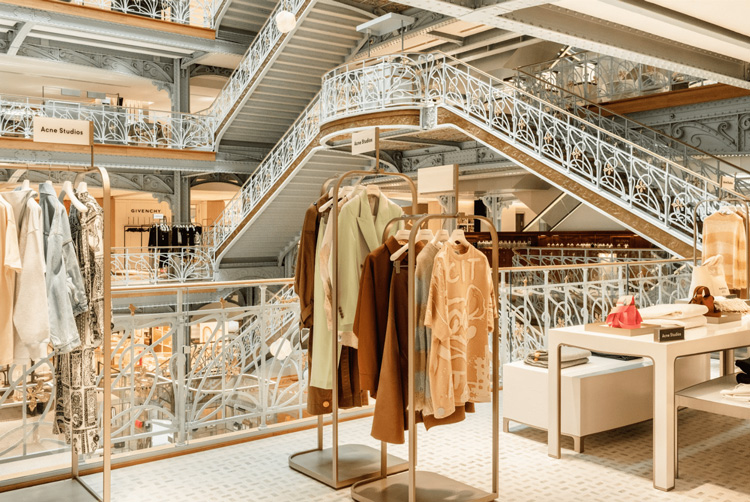 Pont-Neuf store la Samaritaine has one foot in its Art Deco and Art Nouveau past and the other in modernity, according to interiors consultancy Yabu Pushelberg. The studio sought to highlight this contrast by bringing a “warm, refined style” to the interiors.

A range of materials have been used throughout to different effect. Terrazzo lines the floors in a nod to Parisian cobblestones, and curved glass and woven metal mesh screens run the perimeter of the large atrium.

The space is split into several different areas, each with its own distinguishing features. The Modern Loggia for example houses the store’s fine jewellery, and so features Art Deco style display fixtures. Meanwhile the Parisian Boutique, the home of womenswear at la Samaritaine, is a private space that encourages “slow wandering”. 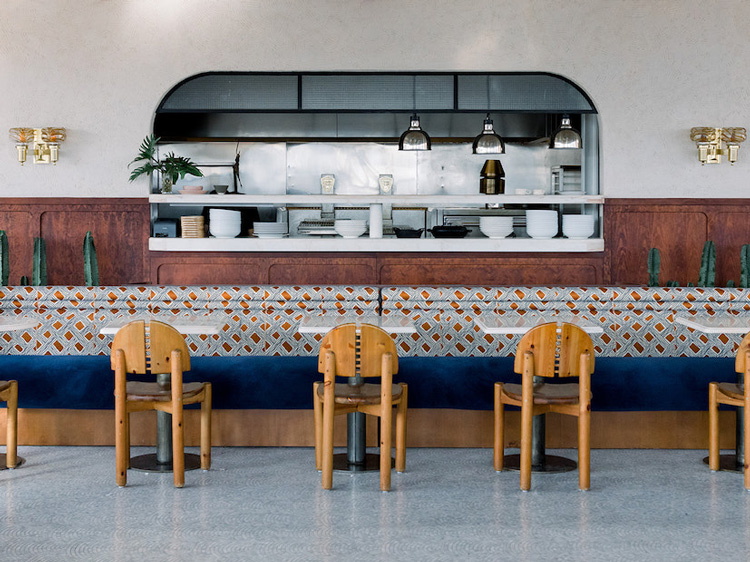 Described as “effortlessly cool” by Studio Pim, Java is a new rooftop eatery in Lisbon, Portugal. Offering sit-down meals, street-food and drinks, the interiors needed to be “casual” yet “cultured”, according to the studio.

The project started with “just a roof and a few beams”, the studio says. And while the rooftop view of Ribeiro Market and the Tagus River were impressive, the team “did not want to be led” by them. Instead, a double-sided bar takes centre stage of the space. Functional as well scene-stealing, it services both the restaurant side of Java and terrace side. Its terracotta tile cladding ensures it fits in well with the surrounding rooftops.

The overarching theme is one of “playful comfort”, Studio Pim says. Huge horseshoe booths upholstered in velvet invite people to pile in, while bronze tones throughout keep things feeling warm. Local artisans have been employed for much of the furniture making and fit-out process, as a final nod to its surrounding city.

The Hoxton, Rome, by Fettle and Ennismore 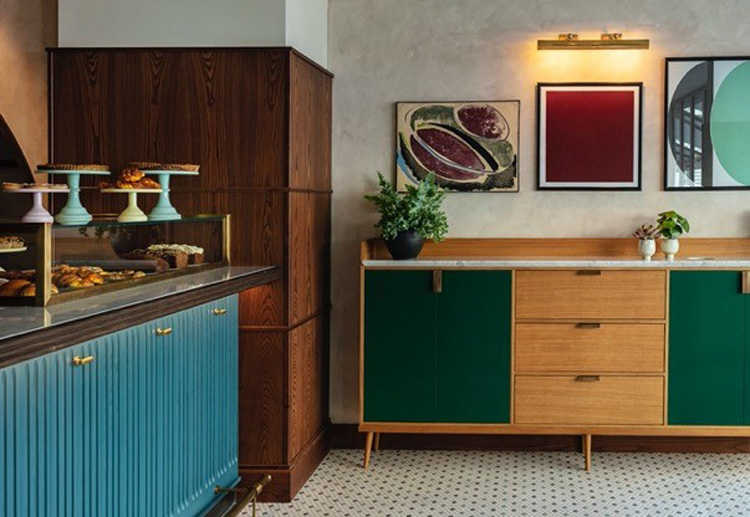 Located in the Roman area of Parioli, the design of the newest hotel in the Hoxton brand is inspired by mid-century Italian design. The space is the result of a collaboration between Fettle and Ennismore Design Studio, and includes a coffee bar, hotel lobby, apertivo bar, outdoor terrace and meeting rooms.

A variety of seating arrangements have been included throughout the hotel’s public spaces to make it feel “comfortable and inviting” according to Fettle, who says the aim was for a residential atmosphere. Layered accessories – like filled bookcases and tables – help achieve this, while “theatrical” elements keep things interesting. The curved coffee bar, main dispense bar and open kitchen are among the most eye-catching, Fettle says.

Have you worked on an impressive interiors project recently? Get in touch with us at [email protected]