Owners of energy-efficient homes could save hundreds of pounds by opting for a green mortgage – available from a growing number of lenders. Borrowers who plan to improve their home’s green credentials may also qualify.

Green mortgages are deals with special rates that are only available on properties with high levels of energy efficiency. They are designed to incentivise people to buy an efficient home or to refurbish a draughty one.

There are now more than 25 green mortgages available – from bigger players including Virgin Money, Barclays and Nationwide, as well as smaller building societies such as Dudley and Saffron. 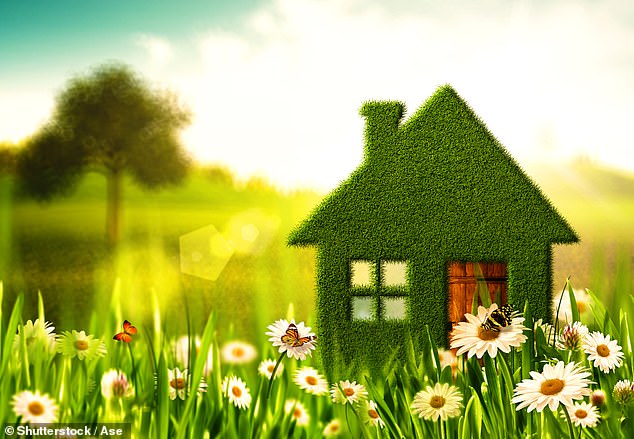 Eco-nomic: Green mortgages are deals with special rates that are only available on properties with high levels of energy efficiency

The savings can be significant. For example, Barclays is offering a green mortgage with a ten per cent deposit, fixed for five years at 3.15 per cent a year. Its equivalent standard mortgage has an annual rate of 3.25 per cent. The borrower would save £719 over the five years of the deal on a £150,000 loan.

The Barclays Green mortgage is competitive compared to other non-green options on the market. Atom Bank, for example, is offering one of the best five-year deals at 3.19 per cent.

Nationwide offers cashback to buyers of energy-efficient homes on all of its mortgages. Buyers of homes with a top rating for efficiency receive £500, while those with a very good rating get £250.

Homeowners with poor energy efficiency ratings could also get a green mortgage if they commit to making improvements.

For example, specialist lender Kensington has an eKo Cashback Mortgage, which pays £1,000 to borrowers who improve their home’s energy efficiency. Saffron Building Society has a Retro Fit Mortgage, which offers a rate reduction if you can improve your home’s efficiency rating within six months of taking out the loan.

Some lenders also offer additional borrowing at a competitive rate for anyone wishing to fund green home improvements. Nationwide’s Green Additional Borrowing provides finance of up to £25,000 at an interest rate of 0.75 per cent a year.

The loan can be used to fund green projects such as installing solar panels, improving insulation, upgrading a boiler or fitting an electric car charging station. The rate compares favourably to a personal loan, which would cost a minimum of 2.8 per cent per annum for a £25,000 loan over three years.

David Hollingsworth, a mortgage broker at London & Country, says that green mortgages are available for both homebuyers and buy-to-let investors and can be particularly beneficial for buyers of new-builds, which tend to have high efficiency ratings.

However, he warns that mortgages should not be chosen purely on their green credentials as there may be better rates available elsewhere.

‘The lending market is so competitive right now it’s very difficult for green mortgages to trounce the rest,’ he says. ‘But we do need sensible and affordable options to help people buy energy-efficient homes or make home improvements. Over time, green mortgages should only become more competitive.’

£15K LOAN FOR A WARMER HOME

Janice, 59, who works at her local NHS hospital, says: ‘We wanted to cut our heating costs and after our daughter bought a new-build home with a similar heating system we decided to investigate for ourselves – we were so impressed by its warmth.’

The pump extracts heat from outside air, even in cold weather. However, at £17,000, it was an expensive outlay. The couple, from Fort William in Scotland, took out a £15,550 Green Additional Borrowing loan with Nationwide, with a rate of 0.75 per cent a year over five years.

‘The rate was so low it was crazy not to take it up. It’s only costing us around £300 in interest over five years,’ Janice adds.

The loan is substantially lower than their main mortgage with the lender, which is fixed at 2.7 per cent a year.

Certainly, the energy efficiency of UK homes will need to be improved quickly if the Government is to reach its ambitious target to hit net zero carbon emissions by 2050.

Heating homes accounts for around 14 per cent of the UK’s carbon emissions and two-thirds of the nation’s homes have a poor energy efficiency rating.

The Department for Business, Energy and Industrial Strategy says lenders can play a key role in incentivising borrowers to both buy greener homes and improve the energy efficiency of existing ones.

However Aaron Strutt, a director at mortgage broker Trinity Financial, believes green mortgages will only succeed if they offer the best value to homeowners.

Some links in this article may be affiliate links. If you click on them we may earn a small commission. That helps us fund This Is Money, and keep it free to use. We do not write articles to promote products. We do not allow any commercial relationship to affect our editorial independence.