One can’t talk about Crystal Bridges Museum without taking note of the architecture that, visit after visit, season after season, continues to amaze from every angle.

You also can’t talk about the museum’s core value of “access to all” without including architect Moshe Safdie’s original vision for the facility.

“The design evolved as a complex that reaches out,” Safdie said at the 2005 press conference announcing the museum proposal. “Museums were exclusive, introverted buildings, and today’s museum is a very different affair. It is for everyone.”

Safdie and his world-renowned firm, the Boston-based Moshe Safdie and Associates, designed the 201,000-square-foot Crystal Bridges Museum of American Art in Bentonville as a testament to the coalescence of art, architecture and nature with which the museum would almost immediately become synonymous. The structure complements the forested ravine in which it sits — swaths of glass on nearly all sides inviting nature inside the galleries at every turn, and natural, regionally sourced material further bridging the exterior and the interior.

Matthew Israel is a curator, writer and Ph.D art historian, as well as the co-founder and chief curator of Artful, a company focused on contemporary art travel, that visited Crystal Bridges in the fall and is planning another visit this year. Israel’s theory on why Crystal Bridges has become a “bucket-list” destination for art lovers also has to do with the building’s construction.

“There’s sort of two major movements in art museum creation,” he explains. “One is rehabbing a historically industrial space, which you’ve seen with the Momentary. The other is actually creating a space that’s almost a work of art unto itself and is unabashedly almost like a sculpture. And so I think people are fascinated reading about Crystal Bridges and always want to visit beautiful museums.”

Safdie, an Israeli-born architect who has designed buildings around the world, has said the museum is an homage to Arkansas legend E. Fay Jones.

Jones, himself an apprentice of the iconic Frank Lloyd Wright, reached significant fame in his own right with a signature style known for blending principles of Wright’s mid-century Prairie style with the aesthetic of his own home region in the Ozarks.

Writer Laurie Whalen reported in the Northwest Arkansas Democrat-Gazette in a 2008 story on Ozarks architecture that, though academics say no singular style defines the region, the “works of those influential Arkansans, along with ‘regionalized’ national trends, complement the Ozark vernacular.”

At the time, Aaron Gabriel, then-assistant director with the University of Arkansas Community Design Center School, told Whalen that Ozark vernacular “is thought of as heavy earthen construction that relates to the ground through the piling of stones or use of heavier timber.”

Its origins grew out of circumstantial necessity rather than intentional design, he said.

When Safdie came to the region seeking inspiration, it’s surely no coincidence that one of the influences he looked to was the architect behind the late Walton patriarch’s own home. The Jones-designed Bentonville residence of Walmart founder Sam and wife Helen Walton also took its cues from nature, including maintaining the spring that flowed through the property.

“It’s an incredible story to have followed where someone is supporting American art, is making such an investment, and then also just really bringing the art to her hometown and having that be a driver for the whole area,” Israel muses on founder and board chairwoman Alice Walton’s journey. “I think it’s just always a way that people who are interested in contemporary art want to think about how contemporary art can build and influence a society.”

It was Northwest Arkansas’ reciprocal influence that led museum leaders to announce plans for a major expansion earlier this year.

The expansion is set to begin in 2022 and will add nearly 100,000 square feet to the facility. Roughly 9 percent of the permanent collection is on view at a given time, and the expansion will increase both the permanent and temporary gallery space space by 65%.

Increasing Crystal Bridges’ footprint so substantially will move the institution from the 45th to the 28th largest U.S. art museum in scale, but the expansion isn’t about competition, says Bobbitt.

“It is in response to meeting the need,” she notes. “A few years ago, Ms. Walton and Mr. Safdie were talking about the 25-year master plan, and it was determined that based on the demand and impact of opening Crystal Bridges, an expansion should happen sooner.”

Walton confirmed that need in a news release: “With the number of visitors we welcome annually, it’s timely to enlarge our building and make sure more people can access these offerings. Having Safdie Architects expand on its original Crystal Bridges design with this new addition will create a unified experience for enjoying art, nature and architecture.”

In line with the museum’s education and outreach priorities, more education spaces, a dedicated floor with community gathering areas and spaces for artists of all ages and abilities to create will further engage community visitors.

It’s a massive endeavor for any institution, says Alex Greenberger, senior editor of ARTnews, the most widely circulated art magazine in the world, according to its site.

Greenberger offered the recent expansion to the Museum of Modern Art in New York City for comparison: That expansion yielded some 40,000 square feet of new space, increasing gallery space by one-third upon its reopening in 2019.

“You really feel the expansion when you’re actually in a museum, and you’re going through something of that size.” 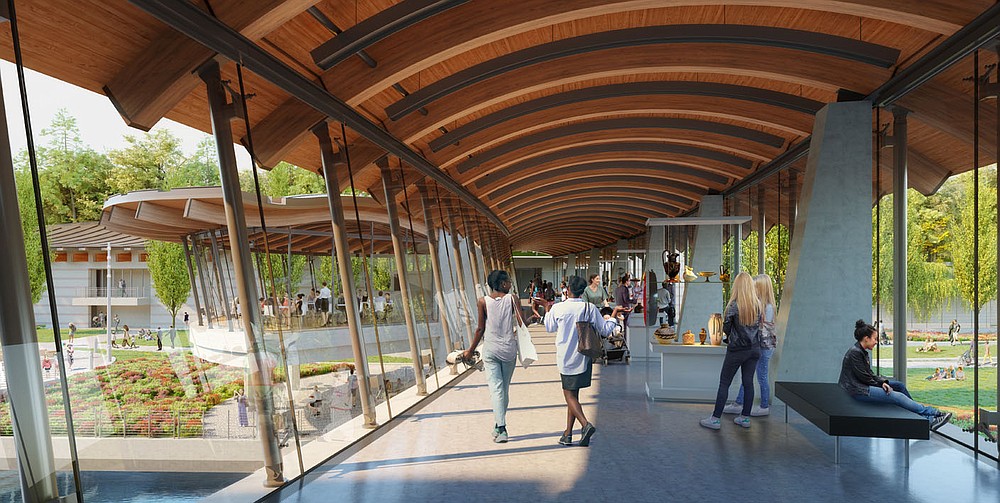 Artist renderings of a planned 100,000 square foot expansion of the Crystal Bridges Museum of American Art in Bentonville. New bridge connecting two galleries, with view to cafe and natural surroundings. (Special to the Arkansas Democrat-Gazette) 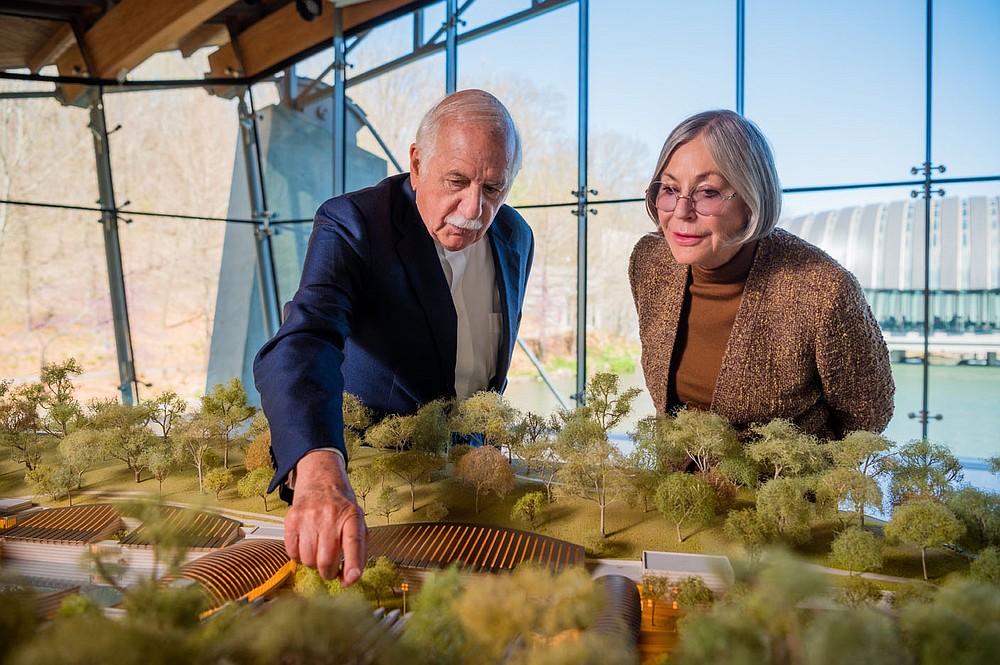 Moshe Safdie, Founder Safdie Architects and
Alice Walton Crystal Bridges Founder and Board chairperson look over the diorama of a planned 100,000 square foot expansion of the museum in the Great Hall at Crystal Bridges Museum of American Art in Bentonville, Arkansas. (Special to the Arkansas Democrat-Gazette) 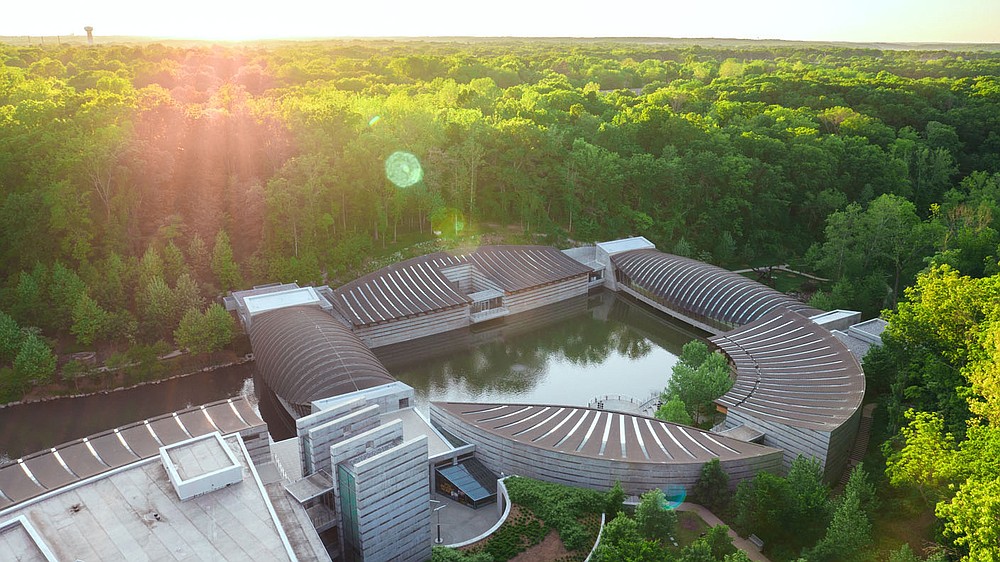